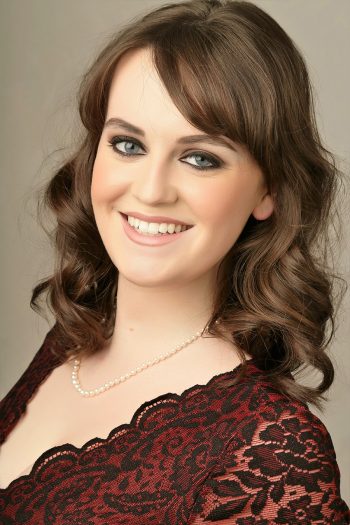 Catrin Pryce-Jones is currently studying at the Royal Academy of Music under the tutelage of Lillian Watson and Jonathan Papp.

She graduated in 2014 from the Royal Conservatoire of Scotland, where she studied violin and voice.
From an early age she competed in the famous Mrs Sunderland Festival, winning many classes, and was a member of the Yorkshire Youth Choir.

Following her studies at Chethams School of Music and Huddersfield New College, she spent four years at the Royal Conservatoire of Scotland. During her time there she sang as a member of Les Sirenes, the BBC Choir of the Year 2013, and was a regular member of the professional choir of St Mungo’s Cathedral in Glasgow, where she sang a solo in the BBC televised Jubilee service attended by Her Majesty the Queen.

Whilst at the Royal Conservatoire of Scotland, Catrin was in demand as a soloist for both contemporary and early music, premiering many specially written contemporary compositions. As a member of the contemporary Said Ensemble, she performed in the Sound Festival, Aberdeen.

She has been a soloist with several Choral Societies including the Edinburgh Choral Union, Hutchesons’ Choral Society and the Halifax Choral Society, with whom she sang Haydn’s Nelson Mass, Handel’s Messiah and Schubert’s Mass in G.

In August 2016, Catrin performed the role of Adele in the opera ‘Die Fledermaus’, with the Winterbourne Opera Company, Salisbury.

Catrin is extremely grateful to the Dame Eva Turner Scholarship, Pimlott Foundation and Ian Mitchell Trust for their generous support during her studies.