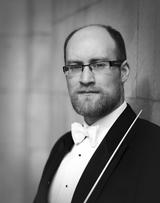 Ben Palmer is increasingly gaining recognition as an inspiring and versatile conductor.

He is acclaimed for his innovative and imaginative programming, in particular with the Orchestra of St Paul’s, a dynamic professional chamber orchestra based in Covent Garden, of which he is musical director.

In addition to his work with OSP, he is in demand as a guest conductor with other orchestras in the UK and abroad. He has conducted such orchestras as the London Mozart Players, the Halle, Britten Sinfonia and Birmingham Contemporary Music Group, and since 2011 has worked as assistant conductor to Sir Roger Norrington, on concerts and recordings with the Orchestre de chambre de Paris, Stuttgart Radio Symphony Orchestra, Zurich Chamber Orchestra, Zurich Tonhalle Orchestra, the Finnish Radio Symphony Orchestra and the Deutsche Symphonie-Orchester Berlin.

In April 2013 he assisted Douglas Boyd for a concert with the Orchestra of Opera North. He appears regularly at the Southbank Centre and St John’s, Smith Square, and in 2010 made his debut at the Royal Albert Hall.

Highlights of the 2013/14 season include a tour to Brussels, Warsaw and Helsinki with the Orchestra of the Age of Enlightenment as assistant conductor to Sir Roger Norrington, his debut with the Kharkov Philharmonic Orchestra, and a programme of Shostakovich and Korngold incidental music with OSP at the Purcell Room.

Recent guest conducting engagements include Oxford University Orchestra (in the Sheldonian Theatre), Boulez’s Messagesquisses with the Royal Academy of Music Cello Ensemble, two performances of Britten’s War Requiem (conducting the chamber orchestra) with Suffolk Youth Orchestra, and a re-invitation to Birmingham University Symphony Orchestra. Recent highlights with the Orchestra of St Paul’s include a two-week, nine-concert tour of China, Berlioz Symphonie fantastique and Messe solennelle at the Queen Elizabeth Hall, and a critically acclaimed programme of world premieres (including new works by David Matthews, Richard Blackford and David Owen Norris) at the English Music Festival.

Ben is in great demand as a choral conductor, and is musical director of acclaimed chamber choir The Syred Consort, and Woking Choral Society, one of the UK’s foremost amateur choruses.

Equally at home in the recording studio, Ben Palmer conducts regularly in sessions for television, radio, film and production music. In addition to his work as a conductor, he is in demand as a composer, arranger and orchestrator.

A trumpeter and composer by training, Ben studied music at the University of Birmingham, graduating with first class honours in 2003. He stayed on at Birmingham to complete an MPhil in composition with Vic Hoyland, before moving to London in 2005 to study at the Royal Academy of Music with Simon Bainbridge.

Plans for 2014/15 include re-invitations to Oxford Sinfonia and the Wolsey Orchestra, and performances of The Dream of Gerontius and A Child of Our Time. It is Ben’s lifetime ambition to conduct all the Haydn symphonies.