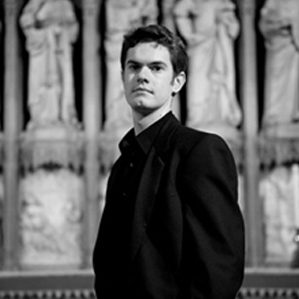 Christopher Borrett was an academic and choral scholar at New College, Oxford from 2005-2008.
At university he performed solos with New College’s world-renowned choir on live broadcasts, recordings and in concert. Most notably he performed solos in a programme of Couperin and Purcell at the York Early Music Festival, and a performance of Bach’s St John Passion in New College Chapel.

After university he was selected to be a member of the Monteverdi Choir Apprentice Scheme under Sir John Eliot Gardiner.

Having completed his year-long apprenticeship, Christopher sings with the ensemble regularly performing a wide range of repertoire ranging from Bizet’s Carmen and Stravinsky’s Symphony of Psalms to madrigals by Monteverdi and part-songs by Brahms.

As a member of the Monteverdi choir he has taken small solo and consort roles such as on the group’s most recent recording of the Bach Motets, a concert performance of Rossini’s Petite Messe Solenelle and the role of Samuel in Purcell’s Saul and the Witch of Endor.

Christopher also sings with other ensembles such as the Marian Consort, the Barabant Ensemble, Stile Antico, Ludus Baroque and the Dunedin Consort.