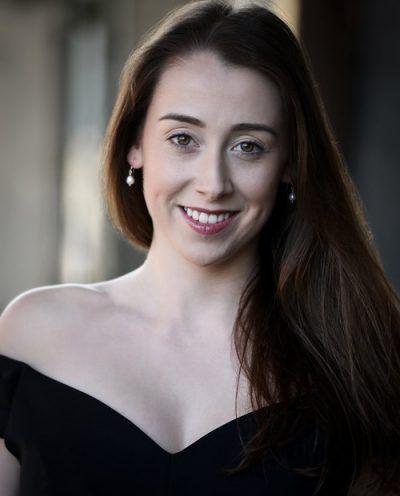 British soprano Kayleigh McEvoy is currently completing the Artist Masters course at the Guildhall School of Music and Drama with scholarship, under the tutelage of Janice Chapman.

She was the winner of the 2017 Essex Young Musician of the Year Competition, as well as the 2016 Freda Parry Scholarship Competition.

Kayleigh is a keen advocate of concert and oratorio repertoire, her recital work having taken her throughout the UK, Europe and Africa. Over the last year Kayleigh has performed an extensive number of vocal recitals, exploring many opera roles,

German lied, French melodie, traditional art song and contemporary music. She made her London operatic debut in 2016 as the Fox in Janáček’s The Cunning Little Vixen.

Since then she has gone on to perform roles such as; Musetta in La Boheme on tour with Barefoot Opera, the title role in Chelmsford Opera’s Patience, and Fiordiligi in Mozart’s Cosi Fan Tutte, with St.Pauls Opera.

Last summer Kayleigh made her German debut in Robert Ward’s The Crucible as Abigail Williams, whlst alos covering the rle of Donna Elvira in Don Giovanni. Other previous roles include, Maria in The Sound of Music, The Plaintiff Trial by Jury, Constance The Sorcerer, Peep Bo The Mikado and Tessa The Gondoliers.

Within Guildhall opera scenes she has performed roles such as, Rosalinde in Die Fledermaus, Mother in Hansel und Gretel and Witch 1 in Dido and Aeneas.

In London, Kayleigh has had the opportunity to work with renowned coaches and conductors such as; Daniel Barenboim, Gustav Dudamel, Graham Johnson, Sarah Walker, Edith Wiens, Jane Manning, Eugene Asti and Mary Plazas.

She has performed in a number of highly sought after venues, including; Barbican Hall, The Royal Albert Hall, Milton Court, Buxton Opera House, The Royal Festival Hall, The Vatican and St. Mark’s Basilica.

This season, Kayleigh is working on a project alongside Ian Burnside, exploring works by composers who emigrated from Germany to Los Angeles in the World War and how this impacted their music.

This November Kayleigh will also be performing works by Robert Franz, as part of a research project and launch of a new CD of his works that have never been recorded before.

She continues to work regularly with her vocal quartet ‘The Lakeside Singers,’ providing entertainment for events and functions. She will also be covering the role of Diana in Guildhall Opera Schools production of Haydn’s Le Fedelta Premiata.

Kayleigh is very thankful to the Pimlott Foundation for their support and guidance through her master’s degree, without which her studies would not be possible.