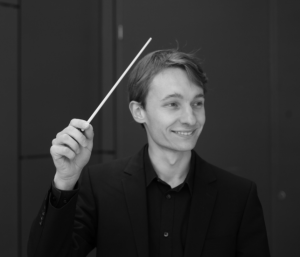 Mark Austin is a conductor of integrity. His sensitive and mature performances of operatic and orchestral repertoire have earned a reputation for their “eloquent intensity” (Guardian).

In spring 2018 Mark works for Royal Opera as assistant conductor for the world premiere of Mark-Anthony Turnage’s opera ‘Coraline’. In the summer he returns to the Grange Festival for ‘Il barbiere di Siviglia’ (assistant conductor to David Parry), and leads the advanced opera course at Dartington International Festival (Mozart ‘Le nozze di Figaro’).

He studies with Sian Edwards and was awarded an International Opera Awards Bursary in 2017.

Mark recently conducted his own Faust Chamber Orchestra in concerts at Kings Place, LSO St Luke’s, and West Road Concert Hall, Cambridge. The orchestra is recognised for its virtuosic performances and distinctive approach to concert presentation.

Recent successes include collaborations with soloists Guy Johnston and Katie Bray, and a concert staging of Bizet’s ‘Don Procopio’ narrated by Dame Penelope Keith. Beside concerts, the orchestra runs a dynamic education programme at a wide range of schools.

Born in London, Mark had lessons in violin and piano from an early age. He played in the National Youth Orchestra, and went on to study at Cambridge University, where he obtained a BA in French and German with distinction and an MPhil in European Literature and Culture.

He studied at the Royal Academy of Music, where he received numerous prizes and was appointed a Junior Fellow in 2012.