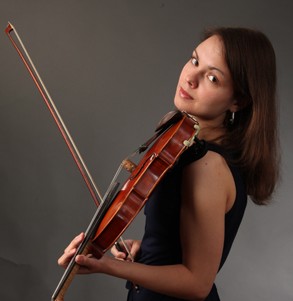 Victoria Goldsmith was born in St. Petersburg, (Russia) in March 1991 and started playing violin when she was six and a half.

At age seven she began her education in the pre Conservatoire Higher Music School in St Petersburg.

She studied for three years at Yehudi Menuhin School, later taking lessons from a former student of David Oistrach, Lydia Mordkovitch. She spent a year in New York studying with Albert Markov, a great russian virtuoso, before returning to Moscow. There she become a student at the Central Music School.

Her first public performance was at the age of eight and the first full length London debut recital at the age of twelve in St John’s, Smith Square.

She has performed in the UK with the Royal Philharmonic Orchestra, the New English Concert Orchestra, and the Ealing Symphony Orchestra amongst at a number of well-known London venues including the Royal Albert Hall, St John’s Smith Square and Cadogan Hall.

She has also performed in the USA at the Bennington Music festival and the Manhattan School of Music and in Russia in the Bolshoi Saal (Grand Hall) the Rachmaninov Saal and at the Saal of Tchaikovski, where she played the Paganini Caprices. She is currently a student in the Moscow State Consertvatiore and studies with a world-known professor, Eduard Grach.