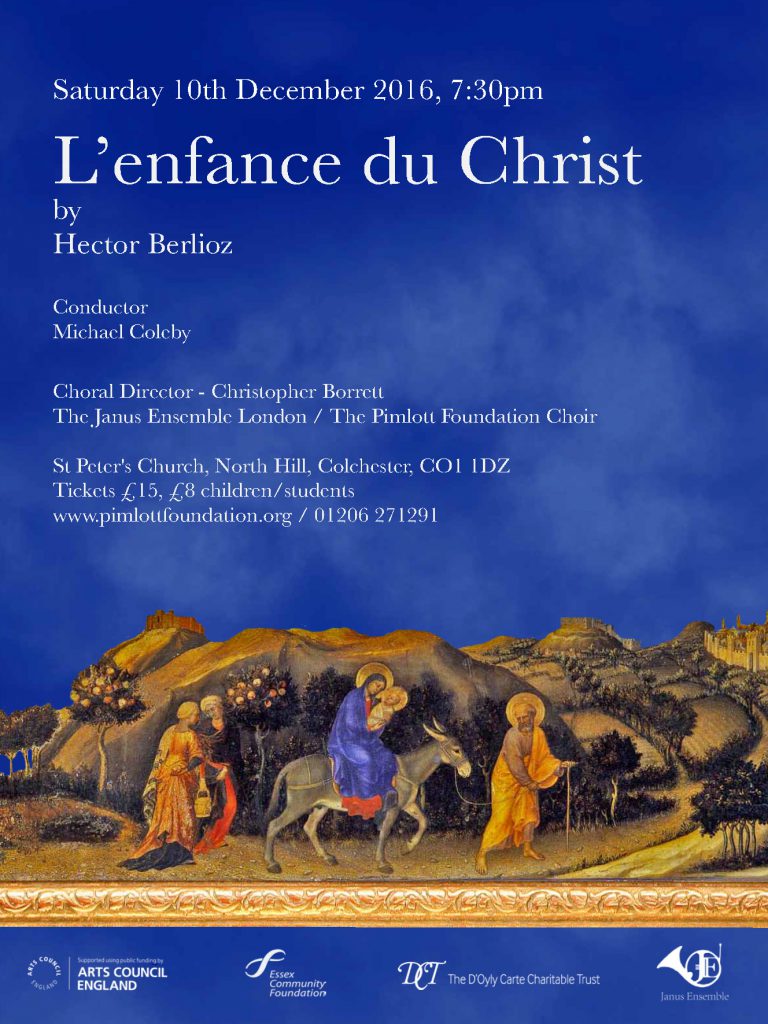 For our 2016 Christmas Concert we performed L’enfance du Christ (The Childhood of Christ)
An Oratorio by Hector Berlioz, at St Peter’s Church, North Hill, Colchester CO1 1NZ on Saturday 10 December 2016.

For the Pimlott Foundation, this concert brought together musicians from a variety of backgrounds.

Richard Moore (Polydorus / Le Pere) and Catrin Pryce-Jones (Marie) have been sponsored by the Pimlott Foundation alongside Dominic Sedgwick, (Joseph).

Choir members were drawn from local choral societies, Pimlott Foundation Family Choir (and keen singers!), under the directorship of our associate conductor Chris Borrett and the Janus Ensemble with conductor Michael Coleby.

You can read the concert programme by clicking here.

L’enfance du Christ (The Childhood of Christ), is an oratorio by the French composer Hector Berlioz, based on the Holy Family’s flight into Egypt. 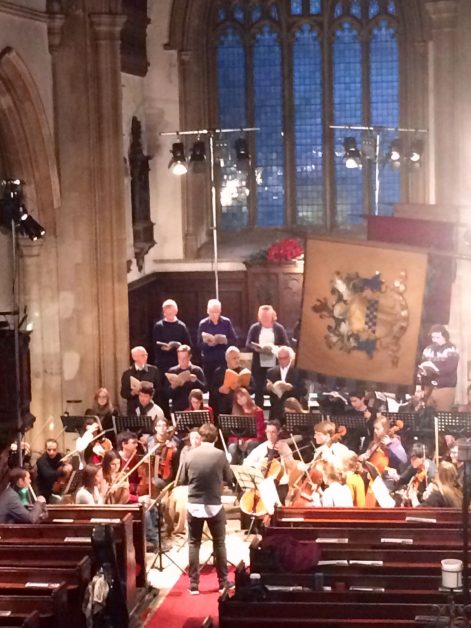 Berlioz wrote his own words for the piece. Most of the work was composed in 1853 and 1854, but it also incorporates an earlier work La fuite en Egypte. It was first performed at the Salle Herz, Paris on 10 December 1854, with Berlioz conducting.

The first of its three sections depicts King Herod ordering the massacre of all newborn children in Judaea; the second shows Mary, Joseph, and Jesus setting out for Egypt to avoid the slaughter, having been warned by angels; and the final section portrays their arrival in the Egyptian town of Sais where they are given refuge by a family of Ishmaelites.

Berlioz was not religious as an adult but remained all his life susceptible to the beauty of the religious music that had enraptured him as a child.

Berlioz’s music was usually received with great hostility by Parisian audiences and critics, who generally accused it of being bizarre and discordant. Yet L’enfance du Christ was an immediate success and was praised by all but two critics in the Paris newspapers.

The work has maintained its popularity – it is often performed around Christmas – and many recordings have been made of it.

Following our Christmas performance of Berlioz L’enfance du Christ, we received lots of feedback from both audience and choir.

It was a wonderful event, and we’d like to share some of the thoughts with you.   If you are interested in joining us for future choral events, please contact us, and we will be only too pleased to let you know what is in the pipeline.

“What a triumph! I didn’t know the work and slightly feared that Berlioz might be a bit overwhelming, for the subject.  Silly me; it was utterly charming.  The words reminded me a little of those homely details in mediaeval  Mystery Plays: the grumbling soldiers, Mary telling the baby to feed grass to the lambs, the death of the ass in the desert, Mary saying her feet were killing her and the final host’s remark that – Hey, I’m a carpenter too.  You secured a wonderful array of soloists and the young orchestra clearly relished the music, a great performance all round. And the choir was great. Of course I support the tenors, but had to suppress a sigh for the angelic choir high above us. We had a quick bite beforehand in the Mercury restaurant where the boss told: ‘Shame you are not going to the panto. That would be much more fun.’ Oh no it wouldn’t.”
Max Wilkinson

“I just want to say how privileged I felt to be part of such an amazing performance last night.  The orchestra and soloists were superb and Michael’s direction was very good. However, we as a choir would not have been able to do this without the brilliant (and patient) coaching of Chris. It was wonderful to sing with such a friendly group of people.  I really enjoyed the whole experience and hope to be part of any future projects.”
Wendy

“Thank you so much for all your efforts in putting this event together and organising the Pimlott Foundation choir. I really enjoyed learning this piece and singing with a choir and orchestra again. The Janus Ensemble were brilliant to hear (and watch so close up!), and Michael and Christopher were very patient with us in rehearsals!  Bravo! Thank you both for the most wonderful experience yesterday evening. It was fantastic to have the chance to learn the L’enfance du Christ, and to be able to perform it with such a good orchestra and lovely soloists. Do please pass on my thanks to Chris and Michael.”
Charlotte

“I’ve had an amazing time doing L’enfance and so want to do more.  I love the foundations of what Pimlott is about, the energy, commitment and belief you have in people (no matter what their talent) is lovely. I was never made to feel bad when I struggled and went off key! I’m in awe of the soloists and orchestra, what an amazing talented bunch! and of course Christopher and Michael.”
Louise

“I just wanted to thank you both for everything really – it must have been enormous hard work for you, and you both were so cheerful and calm and positive all the time even when we singers were less than perfect. It was good to get to know the Berlioz. It is indeed an interesting oratorio, and with a thought-provoking libretto.”
James

During these strange times, we just wanted to make contact to wish you all well, and update you on our (non!) activities at the moment.

Obviously, as we are not allowed to travel or gather, we have had to postpone our May piano concerts, and our Summer Concert, which would have included gardens open, a play about Gainsborough, and art exhibition as well as Family Choir.

But there will be light at the end of the tunnel, and eventually we shall all meet up again to enjoy music together.

We are unsure as yet about our September concert and are awaiting government advice on when we can gather, and in what format but we’ll update you on everything as soon as we have more information.

In the interim, stay safe.  There’s lots of music on the radio and online too. Hopefully we’ll all meet up again at Old House soon.

Looking forward to seeing you in the near future,